Japanese mascots, known as yuru-kyara ( ゆるキャラ ), are cute and quirky characters that are popular throughout Japan! Mascots are a lot like us; they come in all sorts of sizes and colors, have ages and genders, likes and dislikes, and even hometowns that they love very much! Many mascots also have ridiculous talents, such as being able to speak every language on Earth, or being a 0-year old fairy baby!

Official and unofficial mascots exist for all sorts of things in Japan, from brands and businesses, to events and activities, and even places; with the most popular mascots being treated like celebrities!

Similar to robots, there are 3 laws that mascot characters must follow in order to exist:

#1: The mascot must convey a message of love for something.

#2: The character's movements or behavior must be unique, in that they are unstable or awkward.

#3: The character should be laid-back (the yuru in yuru-kyara) and lovable.

Are you surprised? We hope so! Mascots are full of wonderful surprises and they are here to spread joy and happiness... a job which they take very seriously! Mascot characters can also exist to spread awareness about whatever it is they represent. They often do so by incorporate certain motifs into their design, such as local customs or unique patterns.

When mascot characters make an appearance in public, it is known as kigurumi (きぐりみ), and they can often be found attending events and festivals. If you ever see a mascot character out and about, we strongly encourage you to interact with them --they will always friendly because they are already your friend! However, should you encounter a mascot in the wild please report it to someone, as they are most likely lost.

OCTOBER 2021 MASCOT OF THE MONTH

On a clear, cool night off the coast of Japan... when the moon is a wide white river on the surface of the sea... wary sailors stay close to shore, for they know that the Umibozu waits beneath the waves.

Umibozu is a famous yokai (ghostly apparition) that has been sighted off the coasts of Japan since antiquity. He most often appears on clear moonlit nights, and it is said his form resembles a gigantic black shadow with enormous white eyes and a smooth head. It is for this reason that he is named Umibozu, which translates to “Sea Monk”. Throughout the ages, Umibozu has also been described as a sea-monster with a scaly appearance, among others.

While Umibozu has a bad reputation for sinking ships and drowning sailors, he can sometimes come to bring good fortune. Should he appear while you are out at sea, it is recommended that you give him an offering of fish, an bucket with an endless bottom, or a wooden ladle.

-自宅 Home: The dark depths of the sea

-性別  Gender: Assumed to be male

PAST MASCOTS OF THE MONTH

SEPTEMBER 2021 MASCOT OF THE MONTH 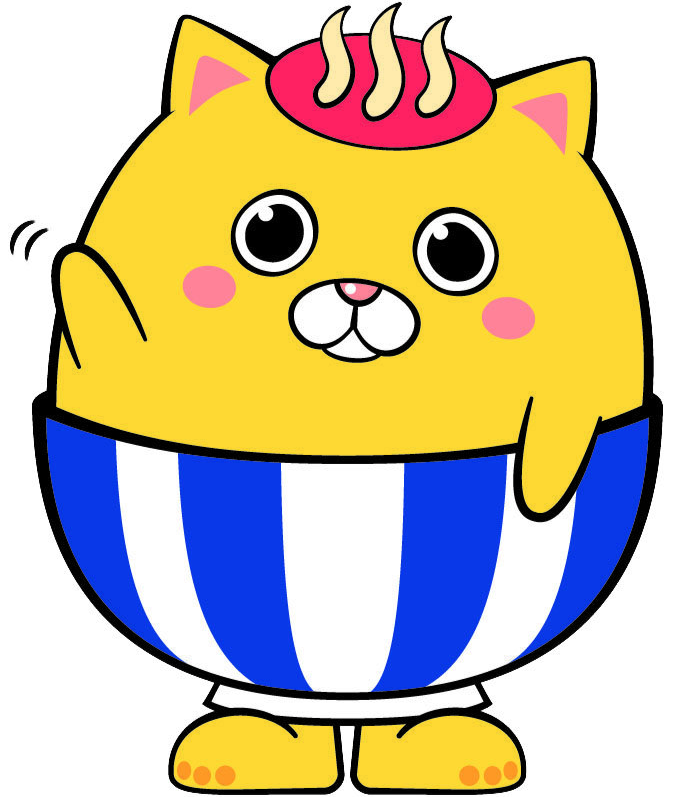 When not honing their pottery skills in their workshop, Hachyamaru can be found visiting Hasami Town's pottery museum, or admiring the sakura trees around the town's main road in the spring. Although they don't say much, if you hang around Hachyamaru long enoug you might hear a soft "Nya～!" now and again.

AUGUST 2021 MASCOT OF THE MONTH

Yahatainu, from the City of Kai

As his name implies, Yahatainu is a dog that is also a Yahataimo potato (one of the City of Kai's locally grown items).

He is a boy, and his birthday is a secret. His special skill is impersonating local potatoes. Yahatainu  officially has a cute personality, and he is sleepy and laid-back.  However, he doesn't like it if people touch the leaves on his head, and he'll get angry. His favorite food is of course Yahataimo potato (やはたいも), as well as Akasaka  Tomato Wine Beef (赤坂トマトワインビーフ), and other City of Kai specialties. His least favorite food is a secret.

Yahatainu's interests include: Radio Calisthenics, going on walks, dancing, napping, and other related activities. His 'sales points' are the Yahataimo leaves on his head, and when he sometimes holds Yahataimo potatoes in his hands.

-出身地 Birthplace: The City of Kai 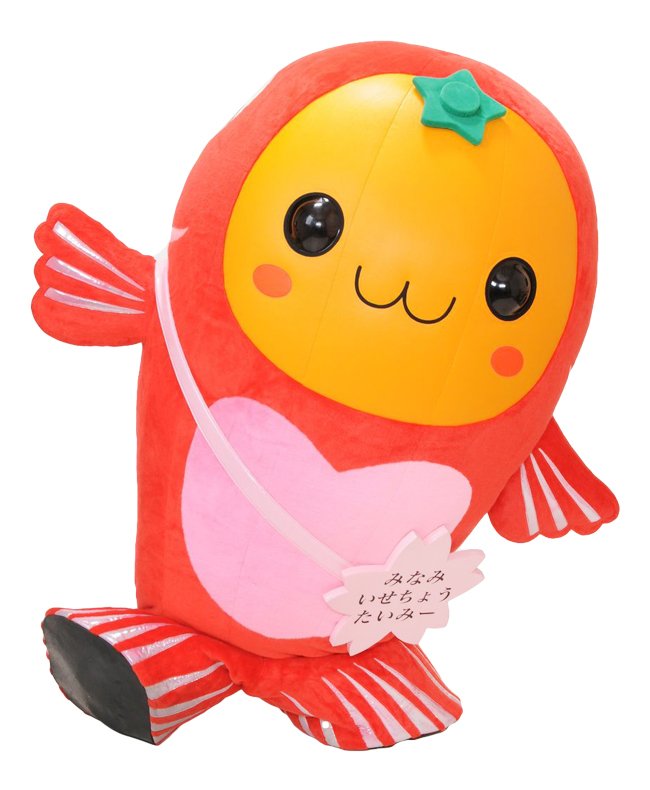 In the tranquil sea-side prefecture of Mie, there exists a fish like no other! Taimee is the official mascot of the town of Minami Ise!
Taimee's father was a Sea Bream named TaiTarou (父:鯛太郎), and their mother was a  mandarin orange (母:みかん).  The fish of Minami Ise is of course the Sea Bream (鯛-Tai), as the town takes great pride in its aquaculture. This is the same 鯛 (Tai) that the snack (Taiyaki) gets its name from! The  tree of Minami Ise is the mandarin orange tree (みかん). The town of Minami Ise is proud of its oranges, which are reported to be sweet, with a rich flavor! The heart on Taimee's stomach is based on the famous Heart-Shaped Pond  (better translated to Heart-Shaped Bay) of Minami Ise, which seriously  looks like a heart when viewed from above.  The  flower pouch that Taimee always carries is in fact a Sakura. Minami Ise's flower is the Sakura, and in the spring a lot of  people come to experience the Sakura tunnel on main street. 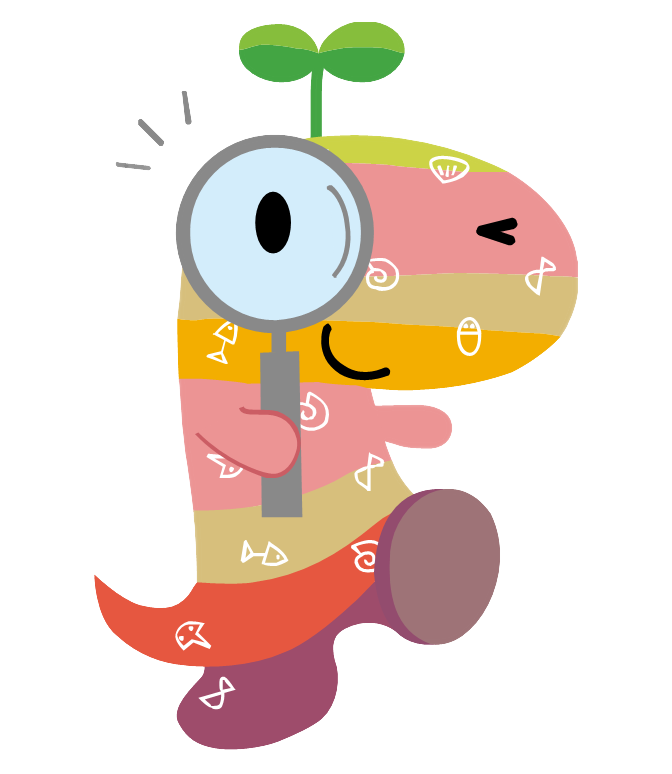 Did you know that there's a Dinosaur only found in one place on Earth... Japan's Hyogo prefecture? That's right, Chi-tan the Tambatitanis is based on an actual dinosaur fossil, and just so happens to be the official mascot for Tamba City!

This cute dinosaur is made up of the Earth's strata, and is on a mission to cherish life forever! The plant on his head represents how new life on Earth springs forth from the old, and is meant to be a hopeful sign for the future.

Have a look at the facts:

-Special skills: Protecting the earth that has created many lives, and cherishing life through eternity! 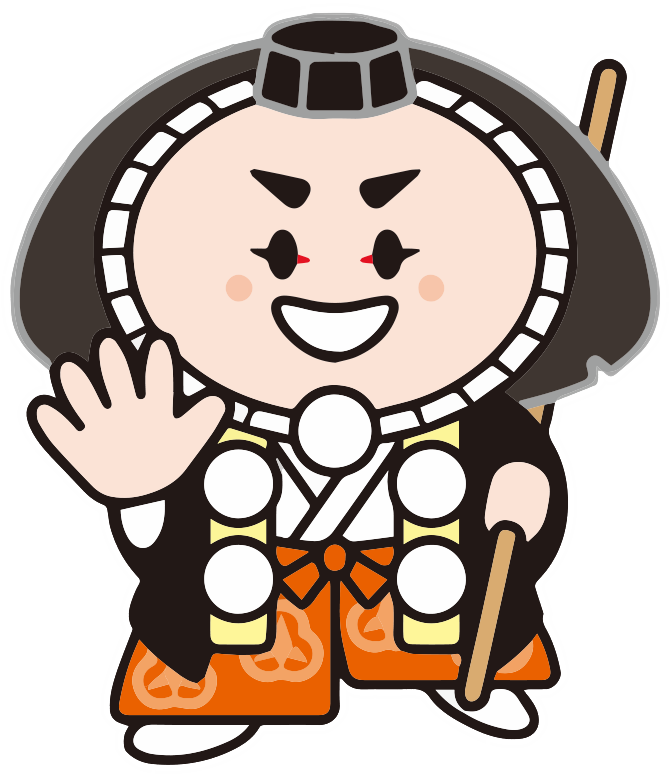 Kabukki is based after the leading character Benkei, from the classic Edo period Kabuki drama “Kanjincho”  from the “Heisei Monogatari”. In the story, Benkei and his lord Yoshitsune disguise themselves as traveling monks to sneak through enemy territory.

Kabukki works tirelessly as the “charm of Komatsu’s PR department” (not an easy job you know) and keeps everyone inspired with his catchphrase “Nankantoppa!” or “Break through obstacles!”. He is usually seen sporting his snazzy orange Hakama embroidered with the Komatsu emblem, but if you catch him in the garden you might catch a glimpse of his pink gardening pants....

With round eyes and sharp lashes to die for, this Kabuki actor is always the talk of the town! Stick with him and he’ll show you all around his lovely home prefecture of Ishikawa!  Now do the Kabukki pose and say “Iiyo Komatsu!”

APRIL 2021 MASCOT OF THE MONTH 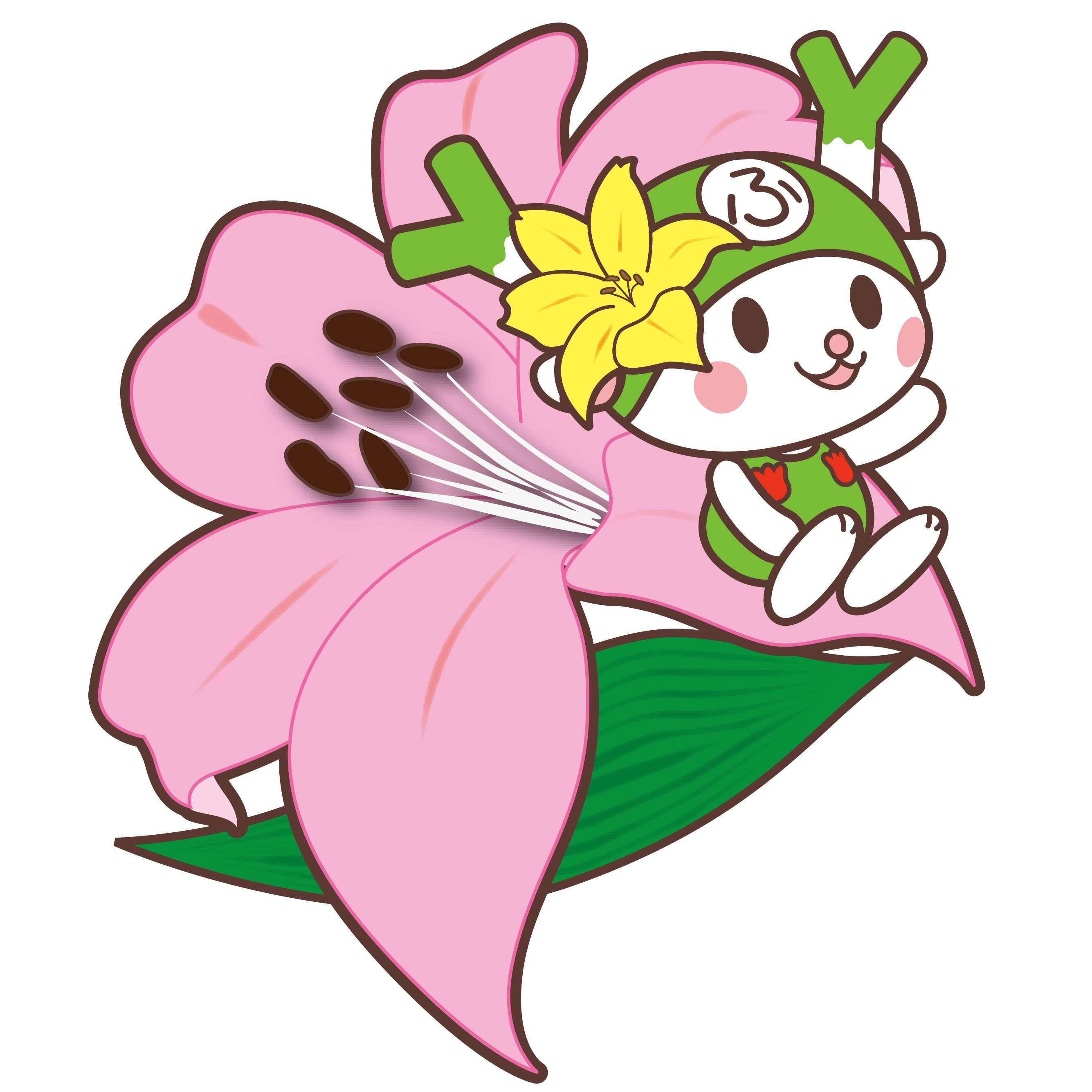 What is a Fukka? Well, they’re creatures indigenous to the Fukayashi region of Saitama Prefecture! Something like a rabbit, something like a deer, a Fukka is rare to encounter in the wild, but if you’re ever lucky enough to meet one you’ll no doubt notice that their distinct horns... are made of negi (leek)!

Fukkachan is the famous official mascot of Fukaya City! Sometimes a boy and sometimes a girl, Fukkachan has a determined personality that doesn't quit easy. When upset, Fukkachan is likely to pout, before going for a walk to let off the “negi-tive” energy.

How did Fukkachan become the official Mascot of Fukaya City? In a rigorous competition against 1406 applicants, Fukkachan worked their way to the top of the list, and ended up being bestowed the honor after being personally chosen by the elementary school students of Fukaya!

MARCH 2021 MASCOT OF THE MONTH 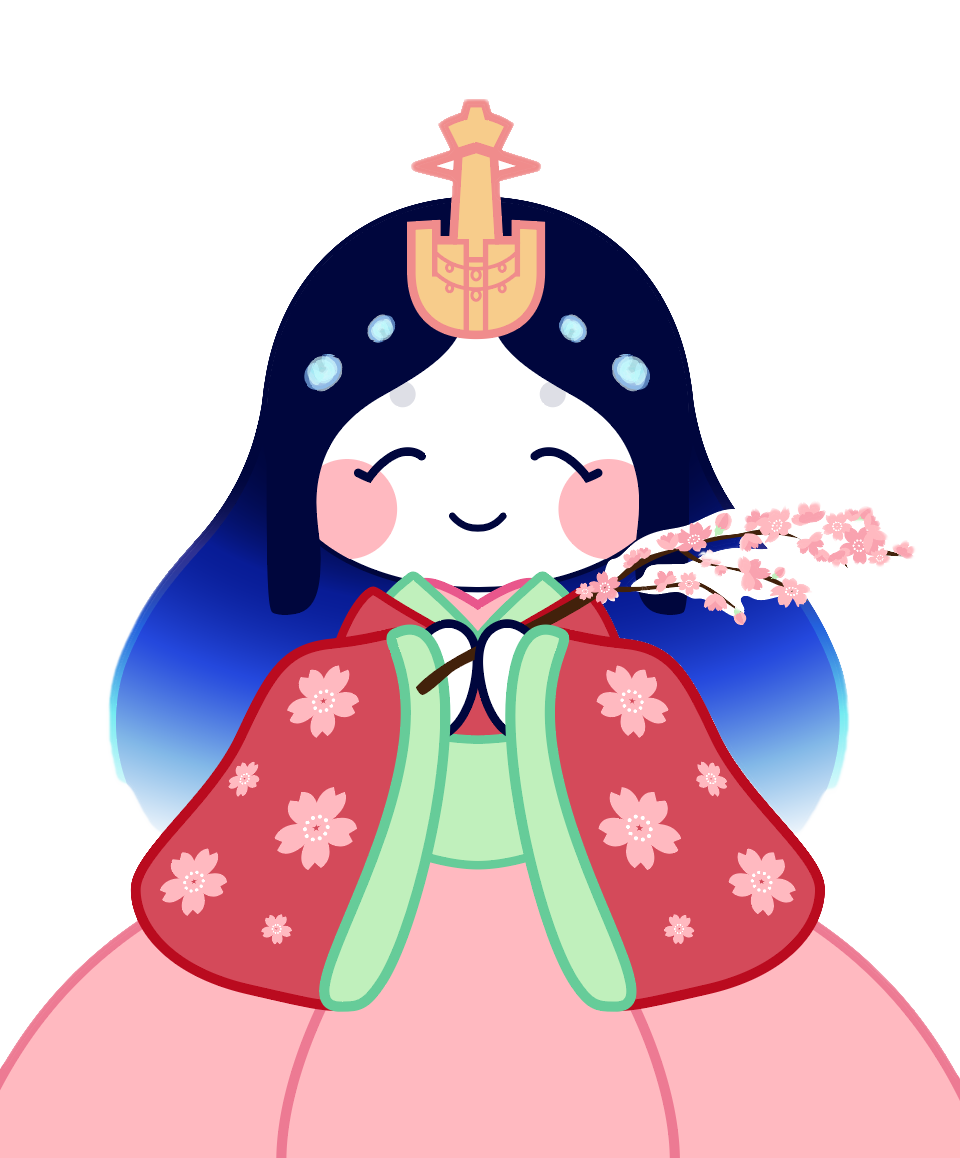 A painted 雛人形 (Girl's Day doll) of incredible beauty and grace, Hinahime (ひなひめ) is an unofficial mascot from Osaka City, Osaka Prefecture! Born each year from the first sakura flower's bloom, she wears a crown adorned with the symbol of Osaka tower, and often carries a branch of budding sakura flowers.

Even among the "who's who" of the imperial court, Hinahime stands out! With a kind smile and gentle gestures, Hinahime hopes to spread goodness throughout her lands!

-希望 Wish: To walk the red carpet (of the Hinamatsuri display)

FEBRUARY 2021 MASCOT OF THE MONTH 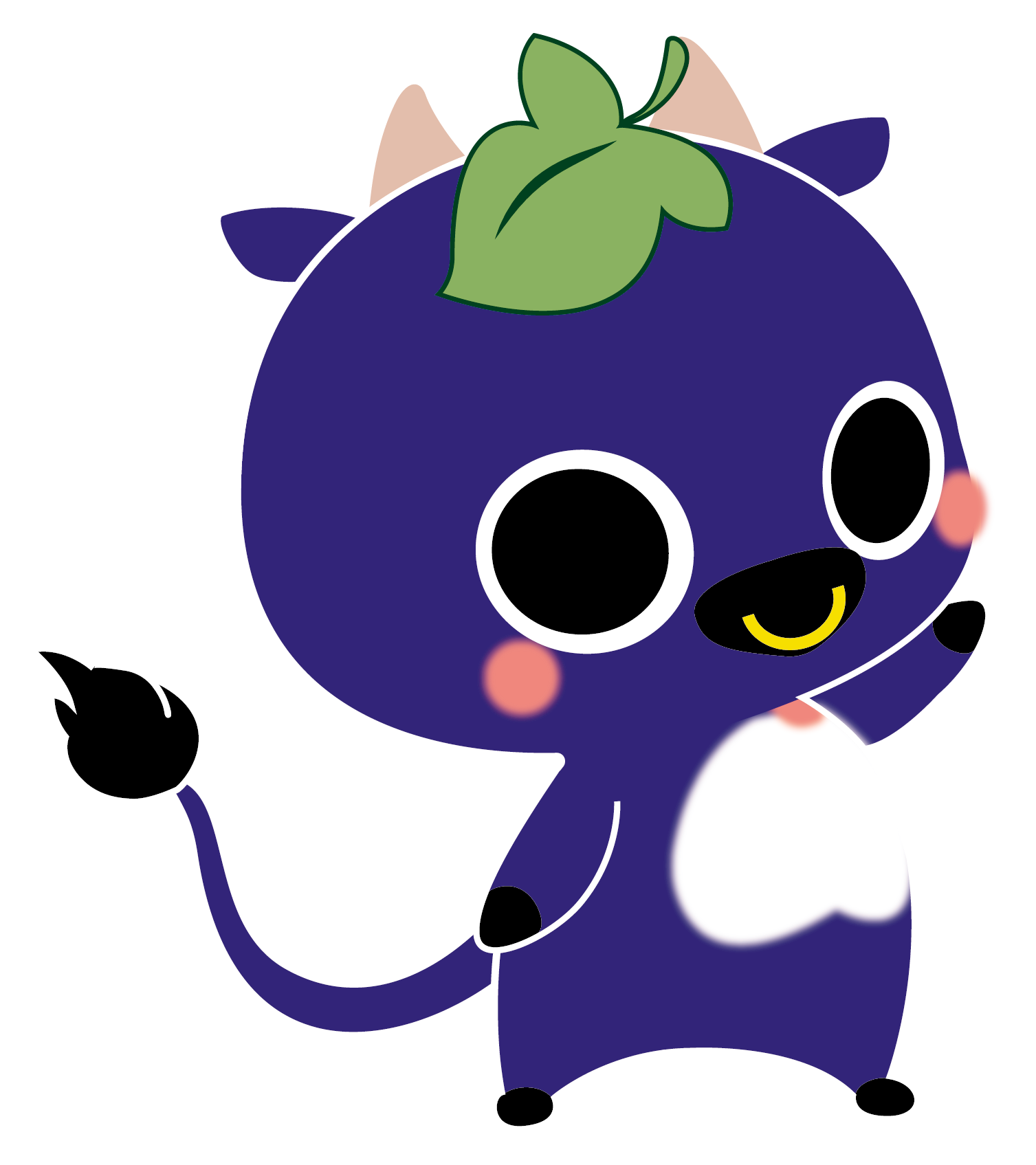 Nimin (にーみん) is a baby Chiyaushi cow and the official mascot of Niimi City, Okayama Prefecture. Rumored to have been born from a grape, Nimin is a fluffy purple cow with a Pione leaf on his head, and a fuzzy patch on his stomach in the shape of a peach. He is beloved by the citizens of Niimi for his friendly personality, and can often be found touring the city and its surrounding vineyards.


Known for being both curious and a rabid gourmand, Niimin's favorite past time is foraging for tasty food in the local countryside. His goal in life is to bring happiness to the people of Niimi City, and to become delicious Chiyagyu beef.

JANUARY 2021 MASCOT OF THE MONTH

Shimae-chan (シマエちゃん) is a Shima Enaga (シマエナガ), a long-tailed tit from Hokkaido. Long-tailed tits are a popular winter  bird in Hokkaido, although they can be very hard to spot. Another name  for this kind of bird is "Snow Fairy" (雪の妖精).
Fluffy like cotton and shaped like a kagami mochi, Shimae-chan is energetic, curious, and extremely photogenic --much like the birds of her namesake! Shimae-chan is never without her stylish hat, a spring butterfly which she picked up in Tokyo. In the winter, Shimae can often be found darting around the snow fields while sightseeing in her homeland of Hokkaido. She loves to show people around!


-Favorite foods: Insects and peanuts
-Favorite activity: Playing in the snow
-Favorite song: Birdsongs
-Looks forward to: Wintering in Hokkaido, Enjoying Hatsumode each year
-Avoids: Walking, Spending too much time in the sun without UV protection

NOVEMBER/DECEMBER 2020 MASCOT OF THE MONTH 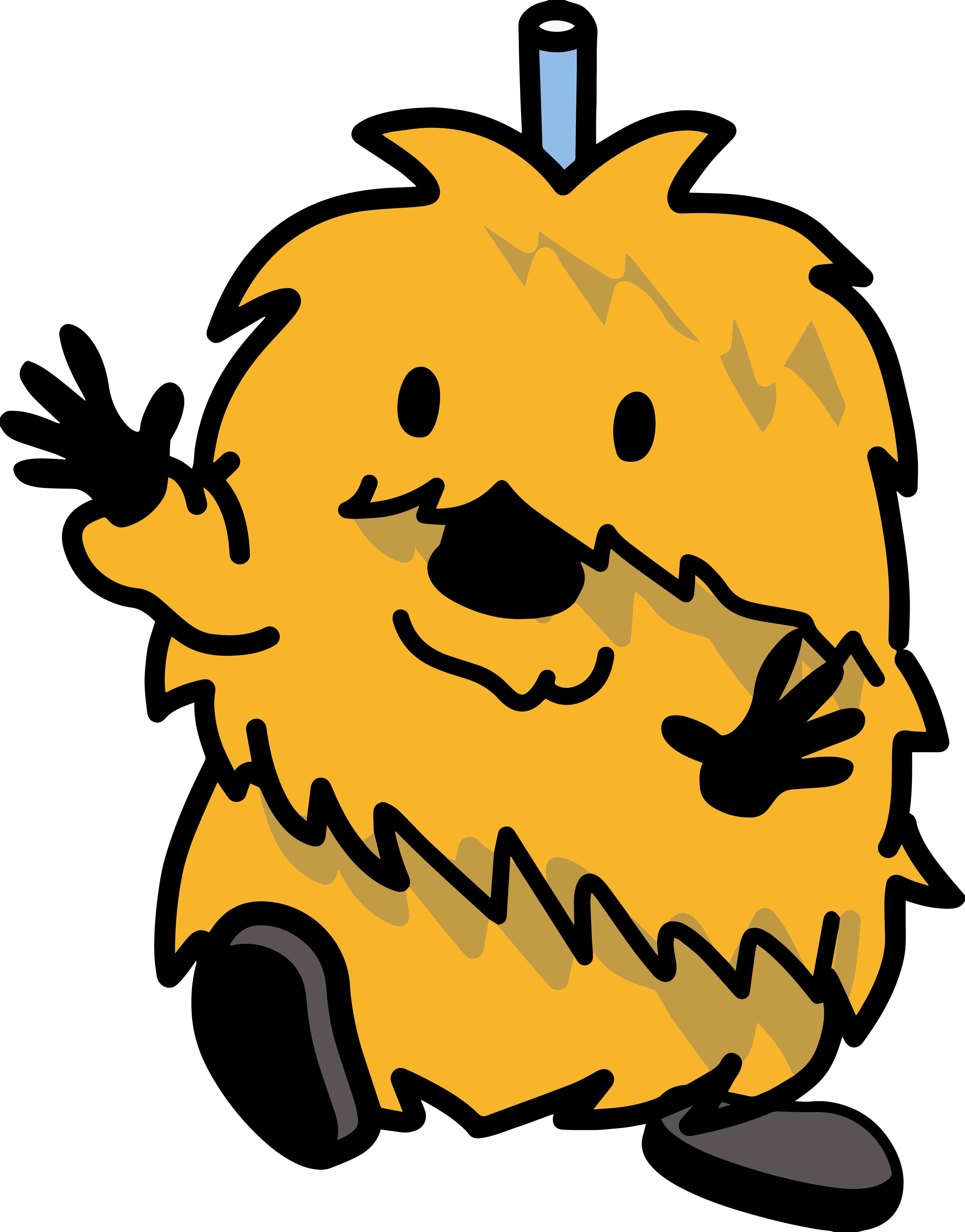 Born in Kurihara City's Ricefield #1, this sentient pile of rice on a pole is the official mascot of his hometown! An expert in all things harvest themed, and well traveled throughout the prefecture of Miyagi, Nejiri Honnyo very much enjoys spending time in the sunlight. He can often be found wandering the streets of Kurihara City, visiting local shops and lending a helping hand on the many farms and fields that surround the city. If you ever run in to him, you should challenge him to a game of rock, paper, scissors. It is his favorite game, and beating him at it is said to bring good luck!

MASCOT OF THE MONTH

AMABIE, OF THE SEA 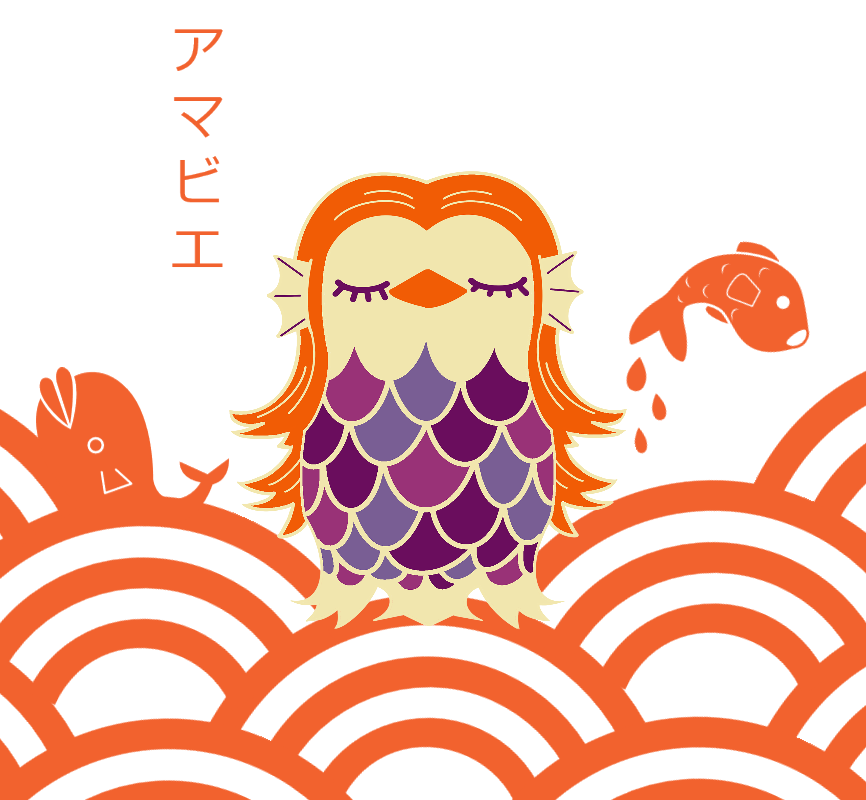 According to Edo period legend Amabie is a yokai that appeared off the coast of Higo province in Kumamoto prefecture. When the villagers went out to meet her she told them that there would be good harvest for 6 years, and if a sickness should break out, they should draw a picture of her and show it to the affected and they would be cured. Almost 300 years later and Amabie is exploding all over the internet! On Twitter, Instagram and more people are sharing their Amabie art as protection from sickness. We’re so happy to share this new/old tradition with you!

Get access to EXTRA SPECIAL BONUSES, giveaways, and updates on our progress throughout the month!